2018 Q1 SNAPSHOT
Singapore’s economy grew 3.6 per cent in 2017, led by growth in the semiconductor sector. The service sector expanded by 3.0 per cent year-on-year (y-o-y) in Q4 2017, supported by growth in the finance and insurance, wholesale and retail trade, as well as transportation and storage sectors. Business confidence remained positive, and Singapore’s economy is forecasted to expand by about 3.2 per cent in 2018.

The retail sector showed signs of bottoming out in Q1 2018, with gross rents of first-storey space in Orchard/Scotts Road and suburban areas increasing by 0.5 per cent q-o-q to $37.40 and $30.60 psf per month respectively. However, gross monthly rents of first-storey retail space in the other city areas remained flat for the fourth consecutive quarter at around $19.75 psf.

Market Commentary
Singapore’s economy grew by 3.6 per cent y-o-y in Q4 2017 (Figure 1), driven primarily by the electronics and precision engineering clusters. These clusters benefitted from the improving global demand for semiconductors, semiconductor equipment and optical products. Notwithstanding, the Purchasing Managers’ Index (PMI) came in at 52.7 points in February 2018, lower than January’s figure (Figure 2) due to a slower growth in orders for the electronics segment. In the same month, the NODX also contracted by 5.9 per cent y-o-y. However, the decrease could just be a blip, as the NODX rose by 16.5 per cent y-o-y in March. 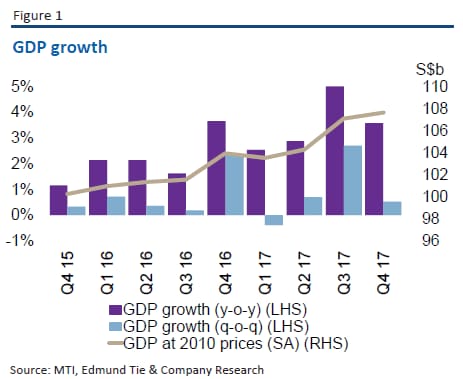 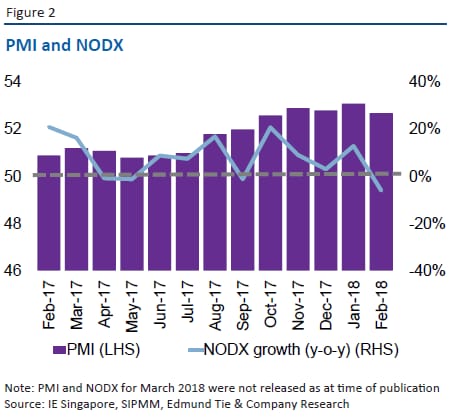 Business confidence in the services sector for H1 2018 remained positive (Figure 3). The most optimistic industries are financial and insurance, wholesale trade and recreation, community and personal services. Accommodation, transportation and storage, and food and beverage (F&B) services are the most pessimistic. 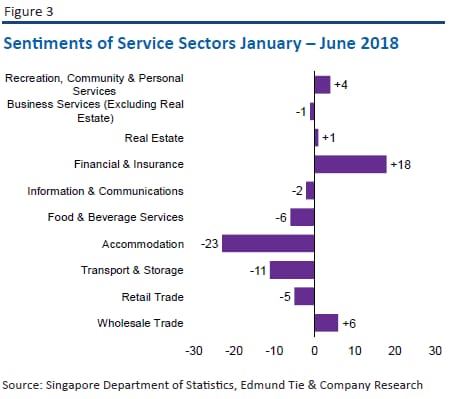 According to the poll by the Monetary Authority of Singapore, private sector economists expect the economy to grow by 3.2 per cent. The upsides for Singapore’s economy are the electronics sector and the strong property market performance. Notwithstanding, downside risks have emanated from trade protectionism and geopolitical tensions.

Market Commentary
The number of private residential properties sold in Q1 2018 declined by 21.7 per cent q-o-q (Figure 4) despite a more optimistic outlook of the market. Notwithstanding the seasonal effects, the lower sales volume was due to fewer units being launched in the primary market in Q1 2018. 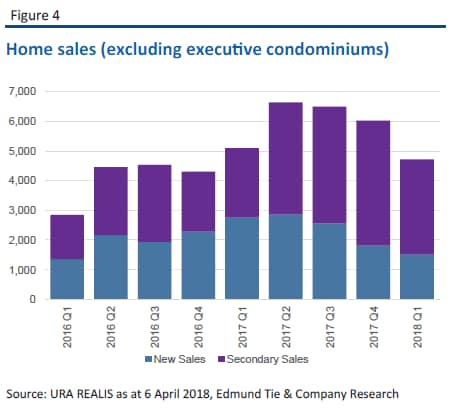 The secondary market in Q1 2018 was active, with sales rising to 3,212 units from 2,345 units in Q1 2017. The demand for homes was partly supported by buyers who sold their homes through collective sales and were seeking replacement homes. There were also more foreign buyers purchasing homes in the prime districts.

Together with limited options in both primary and secondary market, the stronger demand led to the increase in prices for private residential properties in Q1 2018 (Figure 5). The average unit price for non-landed luxury homes rose by 7.0 per cent q-o-q, while the average unit price for freehold properties in prime districts rose by 6.0 per cent q-o-q. The increase for leasehold non-landed homes at non-prime areas was smaller at about 4.0 per cent. 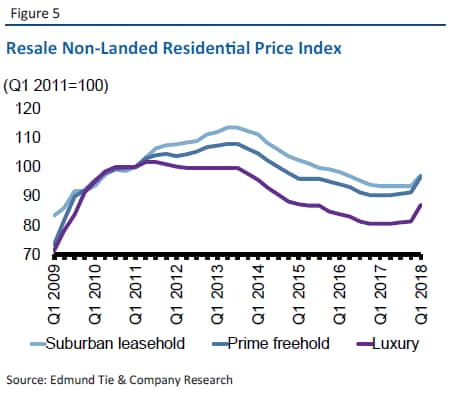 The prices of landed homes also increased significantly in Q1, led by the price appreciation for freehold semi-detached and terrace homes. The average price of freehold terrace homes in prime districts went up the most, by about 4.9 per cent q-o-q.

Separately, the rental market also showed signs of improving (Figure 6). With new supply slowing and the recalibrated market, average rents for non-landed residential properties in suburban districts improved by 0.3 per cent. However, it is slightly premature to conclude that the market has bottomed out as vacancies are still high. 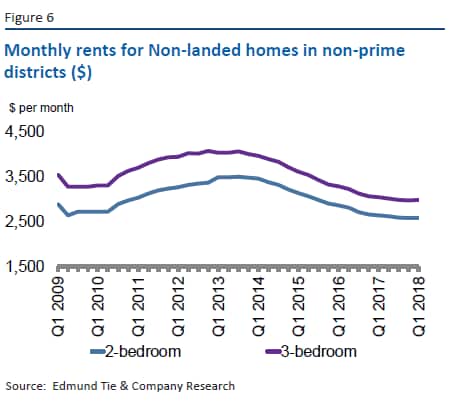 Outlook
We anticipate prices for private homes to continue growing, barring any external shocks. We have also revised our forecast for home prices upwards, and the price index for all private residential properties (excluding Executive Condominiums) to rise between 8.0 and 12.0 per cent. 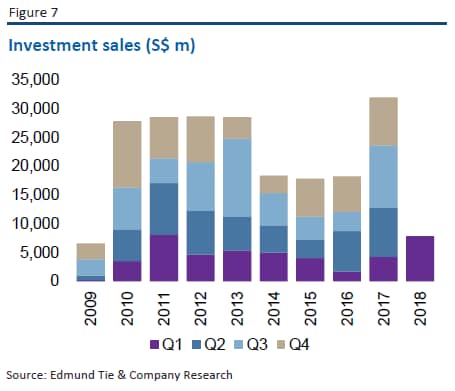 The collective sales market for residential sites remained active, contributing to a 6.0 per cent q-o-q increase from $6.3bn to nearly $6.7bn in Q1 2018. In Q1 2018, 19 sites were sold en bloc, with the largest transaction being Pacific Mansions. GuocoLand and Hong Leong Holdings acquired the freehold site for $980m, which worked out to about $1,806 per sq ft per plot ratio (psf ppr) after including a 10.0 per cent bonus GFA for balconies.

Sales activity for the hotel segment also picked up in Q1 2018. The investment sales of hotel properties increased from $67m in Q4 2017 to $392.8m. The sale of Oasia Hotel Downtown to Far East Hospitality Trust for $210m contributed to the increase in sales.

Outlook
The collective sales market is likely to maintain its momentum. We also expect the collective sales of commercial buildings to pick up significantly in H2 2018. Notwithstanding, more developers have replenished their land banks and they are becoming increasingly selective. More private tenders were closed without the conclusion of the sale. Land rates have also stabilised.

Market Commentary
Retail rents inched upwards in Q1 2018, with gross monthly rents of island wide first-storey retail spaces increasing by 0.4 per cent q-o-q. The improvement in rents came on the back of two consecutive quarters of growing occupancy rates, to 91.9 per cent in Q4 2017.

The increase was led by growth of retail rents in Orchard/Scotts Road and suburban areas. Gross monthly rents of first-storey retail space in Orchard/Scotts Road rose slightly by 0.5 per cent q-o-q to $37.40 psf, after staying firm for six consecutive quarters (Figure 8). Higher footfall due to more visitor arrivals and the lack of significant pipeline supply in the area attributed to higher rents. Additionally, international retailers keen on establishing their brand presences are drawn to Singapore’s prime shopping belt. 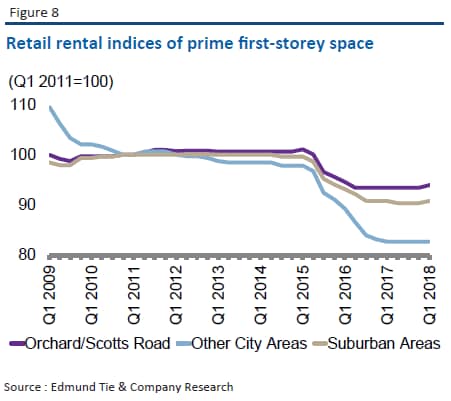 Likewise, retail rents of first-storey space in the suburban areas grew by 0.5 per cent q-o-q to $30.60 psf per month. This was the first q-o-q increase since Q2 2012, when gross rents inched up slightly by 0.1 per cent q-o-q. Suburban malls at choice locations in populous residential estates continued to perform well.

On the other hand, gross monthly rents of first-storey retail space in the other city areas stayed firm at around $19.75 psf for the fourth consecutive quarter in Q1 2018.

Outlook
Despite the positive sentiments, the retail environment remains challenging especially for fashion retailers. The demand for retail space is expected to come from the thriving F&B sector. In 2017, there was an increase in formation of F&B businesses to 3,298 from 2,968 in 2016, while the cessation declined from 2,780 in 2016 to 2,117 in 2017.

On the supply side, about 1.1m sq ft of retail space will be slated for completion in 2018 and 2019 respectively, with the bulk of this supply in the suburban areas (Figure 9). Despite the large amount of supply, these new developments have reportedly recorded healthy pre-commitment rates. 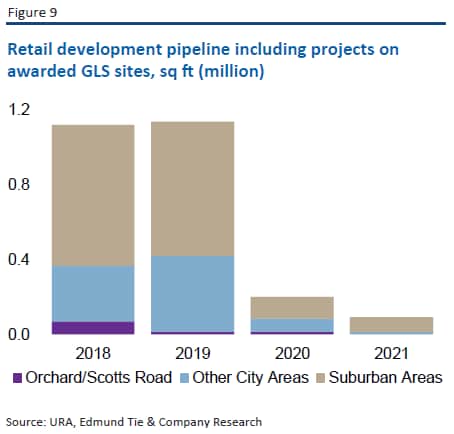 The growth of wealth management and the information and communications technology sectors continued to support demand for office space. Demand also came from co-working space operators that were increasing their footprint.

Gross monthly rents of Grade A offices in Raffles Place rose by 1.0 per cent q-o-q to $9.70 psf in Q1 2018 (Figure 10), supported by strong occupancy levels as vacant spaces in Grade A buildings at Raffles Place backfilled. Outlook
Monthly office rents in the CBD are anticipated to improve in 2018, with tenants likely to have fewer options in the CBD in 2019. The bulk of supply in 2019 emanates from the city fringe (Figure 11). Additionally, the upcoming completions in 2018 have reported healthy pre-commitment rates. 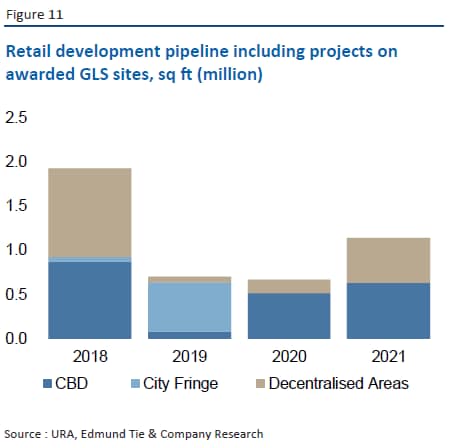 Notwithstanding, the net absorption rate will decline in the future. As more companies adopt the fast-fail mindset, more flexibility is required in their operations. As a result, demand will be diverted to co-working spaces to meet short term needs.

DISCLAIMER - EDMUND TIE & COMPANY
This report should not be relied upon as a basis for entering into transactions without seeking specific, qualified, professional advice. Whilst facts have been rigorously checked, Edmund Tie & Company can take no responsibility for any damage or loss suffered as a result of any inadvertent inaccuracy within this report. Information contained herein should not, in whole or part, be published, reproduced or referred to without prior approval. Any such reproduction should be credited to Edmund Tie & Company

DISCLAIMER – CITIBANK
The market data and information herein contained (“Information”) is the product or service of a third party not affiliated to Citibank Singapore Limited (“CSL”) or its related entities. None of the Information represent the opinion of, counsel from, recommendation or endorsement by CSL, its related entities and their respective officers, employees, directors and agents (collectively, the “CSL Group”).

The Information is provided for general information and/or educational purposes only. No part of the Information may be reproduced without the prior written permission of CSL.

NO WARRANTY
The Information is provided “as is”, without warranty of any kind, it has not been independently verified by CSL Group and use of the Information is at your sole risk. The CSL Group shall not be liable and expressly disclaim liability for any error or omission in the content of the Information, or for any actions taken by you or any third party, in reliance thereon. The Information is not guaranteed to be error-free, or to be relied upon for investment purposes, and the CSL Group makes no representation or warranty as to the accuracy, truth, adequacy, timeliness or completeness, fitness for purpose, title, non infringement of third party rights or continued availability of the information.

LIMITATION OF LIABILITY
To the maximum extent permitted by law, the CSL Group shall not be liable for any loss or damage of any kind whatsoever (including, without limitation, any special, consequential, incidental or indirect damages, or damages for loss of profits, business interruption, and any and all forms of loss or damage, regardless of the form of action or the basis of the claim, whether or not foreseeable) arising out of the use of the information (provided in any medium), even if any member of the CSL Group, has been advised of the possibility of such loss or damage.

Citigroup.com is the global source of information about and access to financial services provided by the Citigroup family of companies.